In keeping with stock aero rules, there’s not a ton to do on the Evo. As the clubs I plan on competing with (smartly) allow any stock aero/body, as in JDM or EDM, an obvious one is the JDM rear bumper for the Evo, which, for the Evo 9, looks much better than the chunky USDM 8/9. In deciding between the SE lip and the regular lip, I opted to go again with the stock lip, as I think it does look better than the SE lip, which has some air guides in it which presumably add more front grip.

With track days in mind, the one thing I did do was switch from an Evo 9 wing to an Evo 8 wing – I’m not sure if the 9 wing is not real carbon fiber, is hollow, or both, but the 8 wing is much sturdier. With that though, I had never bothered to replace the gurney flap that sits at the back of the wing – until today. Termed as a “wickerbill” from Mitsubishi as part of the zero-lift kit, this simple attachment to the wing adds about 30lbs of additional rear downforce when going ~112mph.

In part because I was detailing the car, I clay barred everything down to have a clean foundation, and used some Adam’s surface prep (ethanol?) for good measure. With an extra hand, we were able to get this one without a hitch – hopefully it stays on as I go deep 100+mph depending on what track I’m at.

Today was also the start of some deep clean detailing for the Evo. Due to some of the parts getting repainted, much of the car was already in decent condition. Nonetheless, I rolled the car out and gave it a wash, dried it, and rolled it back in. The car was then clay barred and dried again. Finally, I used some actual (albeit cheap) ceramic coating from Amazon. I am going to put a second coat on tomorrow, followed by the Adam’s ceramic coating I have on the next day. After that coat cures, I am going to use Turtle Wax’s Hybrid Solutions Ceramic infused wax to top it off. Is it overkill? Extremely, but it’s quarantine and I’ve got time. 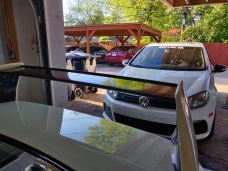