As is customary, after I get a few events in with the car, I have a number of tweaks I make to optimize the setup.

The first is a minor tweak – the rear bar was set to the middle setting last event for the last session at Grid Life, and while the car felt good, it was a little too loose overall. Tweaked the FSB bracket to the next setting over, possible with Ciro’s special FSB brackets.

I had the exhaust reworked as well. My “ultraquiet” resonator was mounted vertically, causing it to be very close to the ground. The rear body of the exhaust also was very low, simply due to lazy routing. This was more apparent in some pictures than others. Both were corrected – the ultraquiet resonator was replaced with a bullet-style resonator, while slightly lifting the exhaust body. The routing of the rear section was redone entirely, still using spare mandrel bent piping I had left over, in order to maintain good flow. Finally, the 200 cell cat I had was replaced with a 100 cell cat. This should provide a marginal amount of additional flow and reduced backflow & heat. Surprisingly, there was little-to-no change in how loud the car is, which was a relief for me. 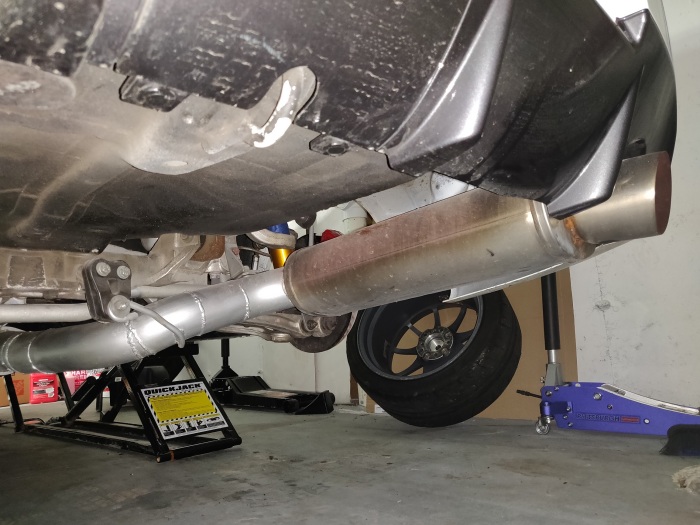 Also got new axles – DSS’s “900hp” front axles. Obviously I’m making around a third of that, but with my fronts seemingly on the way out, and stock axles becoming more and more difficult to find, wanted to go ahead and grab a set of these. They look great – description below:

Driveshaft Shop Level 2 Front axles for the Evo VII / VIII / IX feature aerospace grade 32 spline, up from the factory 30 spline, torsional axle bars with our special double temper process, billet inner and outer CV’s and are a direct bolt-in to the factory hubs.

Finally, I am giving in and getting an E85 tune from Andy Smedegard (ASM). He provides the dual map tune that will let me switch back and forth between tunes. Eventually I do want to get a flex fuel tune, but I think this will serve me well for competitive racing for the near future. The E85 also required FIC1200s (low-Z) and a fuel pump, which I already have (DW300). 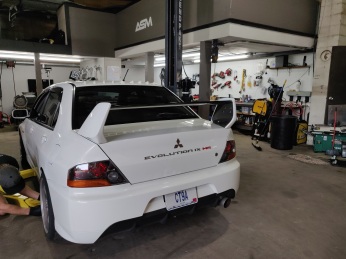 While at ASM, There were a ton of small improvements made to the car. Sometimes it is really helpful to have an Evo specialist take a look at the car, as they are so much more familiar with it, what’s normal and what isn’t. Some of the improvements/fixes include:

For the tune itself, we decided to remove the hybrid boost setup (MBC + EBC) and just go with the EBC. The MBC didn’t really do much anyway, and this eliminated another potential point of failure. I inquired about crushing the blowoff valve to hold more psi, but he warned that it came with a tradeoff – boost surge at partial throttle – and we decided not to go this route. Drivability matters so much more for consistent track times than just slapping on more power. With the injectors on, the relay for the injectors on, and the fuel pump good, we were ready to tune!

The first map we tuned for was pump gas. Strangely enough, there was no 93 octane within a 40 mile radius of the shop. With the mix I had in the tank, we ended up tuning for something like “92” octane. After that, we filled the car with E85 and went for it again. The numbers came out pleasantly surprising – About 15hp across the board more than I was hoping for. On pump gas (92), we made 337hp and 332lbft of torque, with room still left for 93. On E85… we made 405hp and 407lbft of torque. Initially we had hit even higher than that, but decided to richen up the map a little due to variance in E85.

The car feels pretty darn good. I wouldn’t say it’s earth shatteringly different, but the midrange now pulls even harder than it did before. I’ve been running E85 since the tune, but this is a dual map tune. In order to switch back, I just need to turn the ignition to ON, and hold the gas for five seconds. The CEL will flash slowly for the pump tune, and will flash quickly for the E85 tune. I have to imagine the pump tune will be roughly what it was before – we’ll see how it goes, as I’d like to run both the 93 map and the E85 map at some point this year.