This is the big one – most people who do this job don’t flush all the fluid like I’m about to describe, and arguably don’t need to if this is going to be a regular job – I bought the car with 85k miles already on it, so it was one of the first things I wanted to do. I’ll probably just drain and fill every 30k moving forward, instead of doing the whole thing like I did this time. This is much more involved than an engine oil change or a diff fluid flush, so please do so at your own risk. While I used 14qts, I think this trans will easily take 16qts – I simply stopped short once I was running low on new fluid. I did this job once before on my Corolla and the process was very similar, so I was comfortable with what I was doing.

Car up on ramps. You have to remove the splash guard first in order to access the trans – these consist mainly of clips and screws that are 10mm, and alternatively have a screwdriver slot: 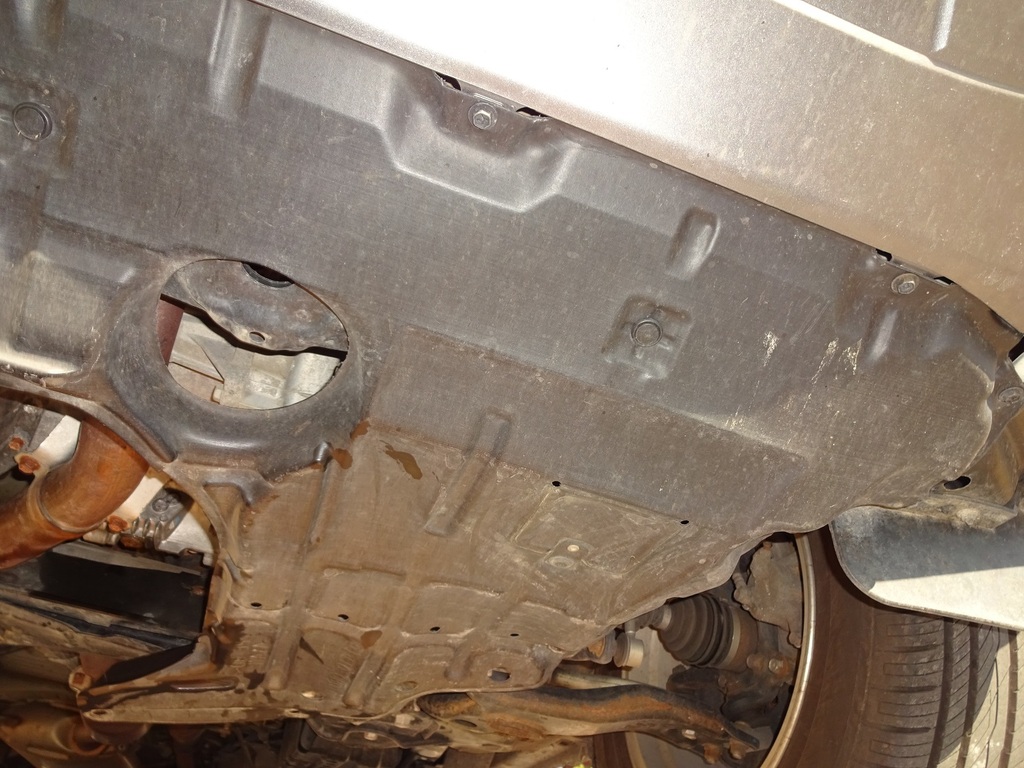 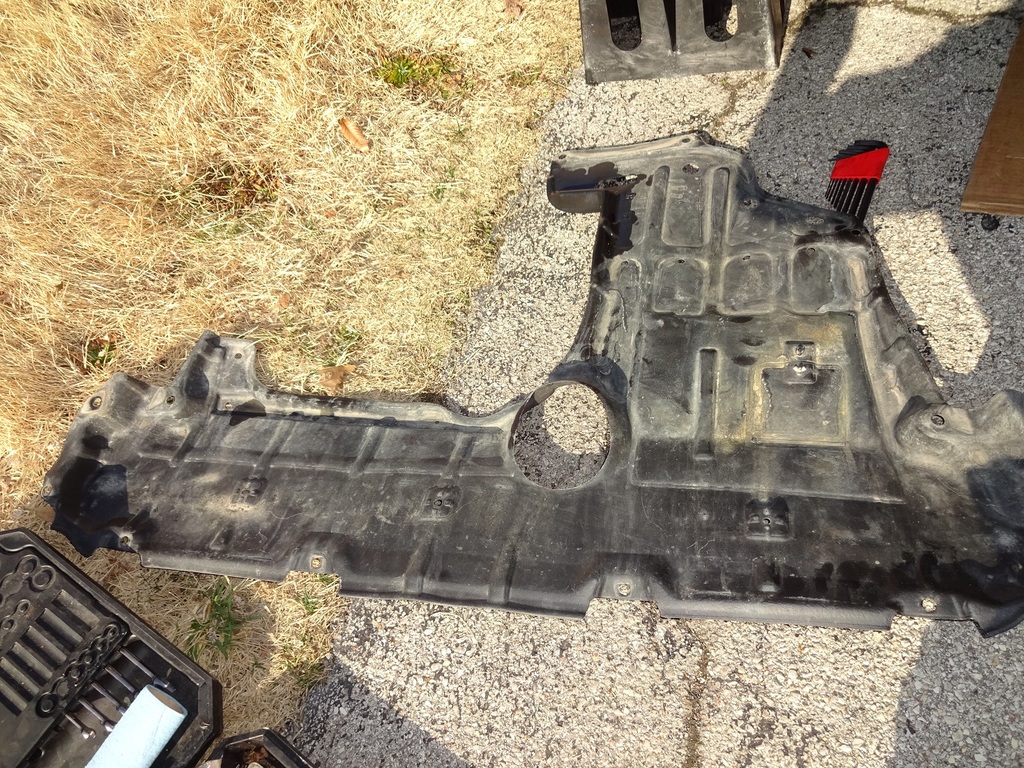 Drain the trans – I placed the jug under it to get an idea how much was coming out of the pan, which didn’t work so well: 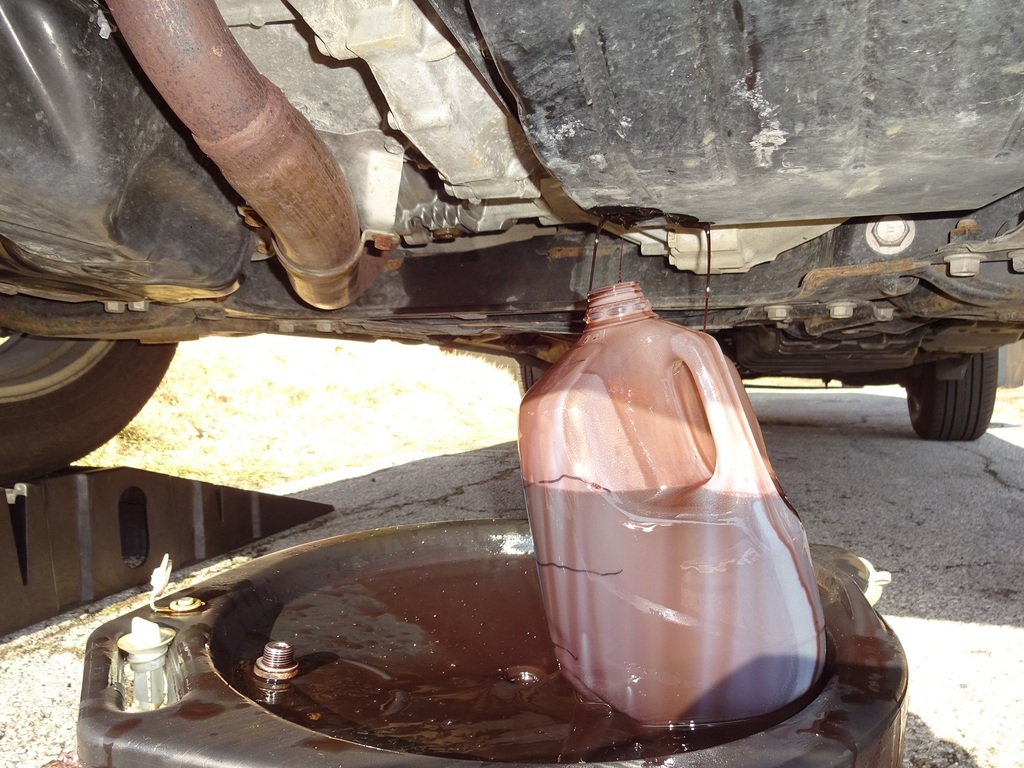 Once drained, remove the pan – there are a total of 17 10mm bolts here. For one side of the pan you have to first unbolt and remove part of the subframe bracing – not as hard as it sounds though, just 4 17mm bolts to zap off (right side of the first pic below): 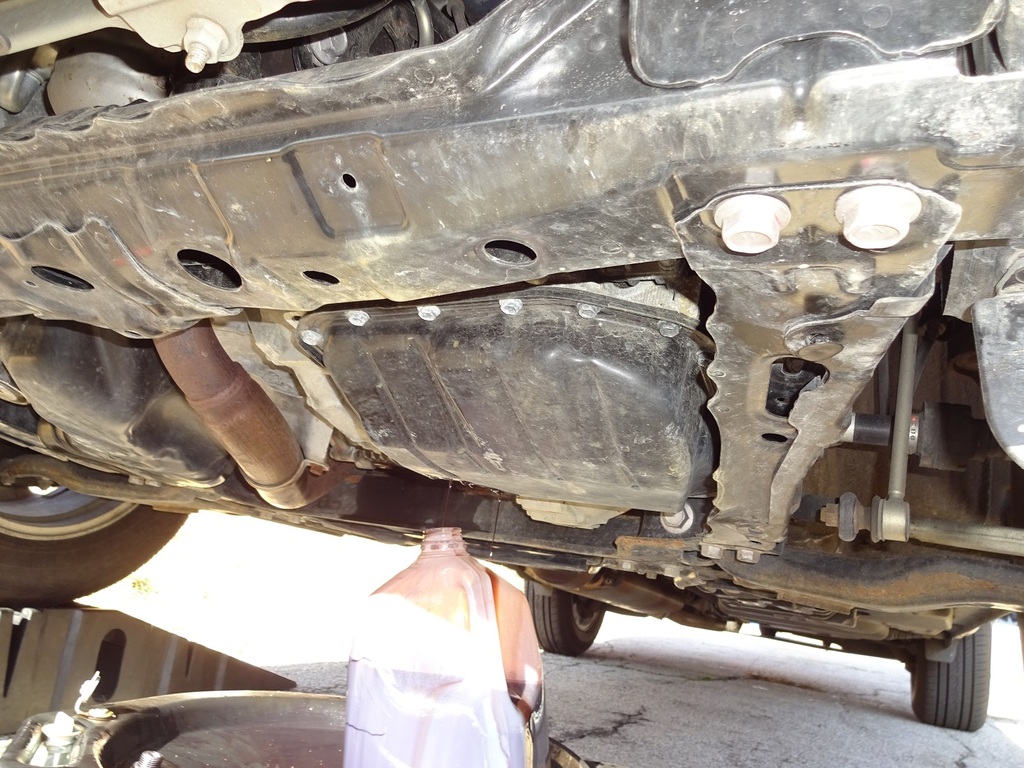 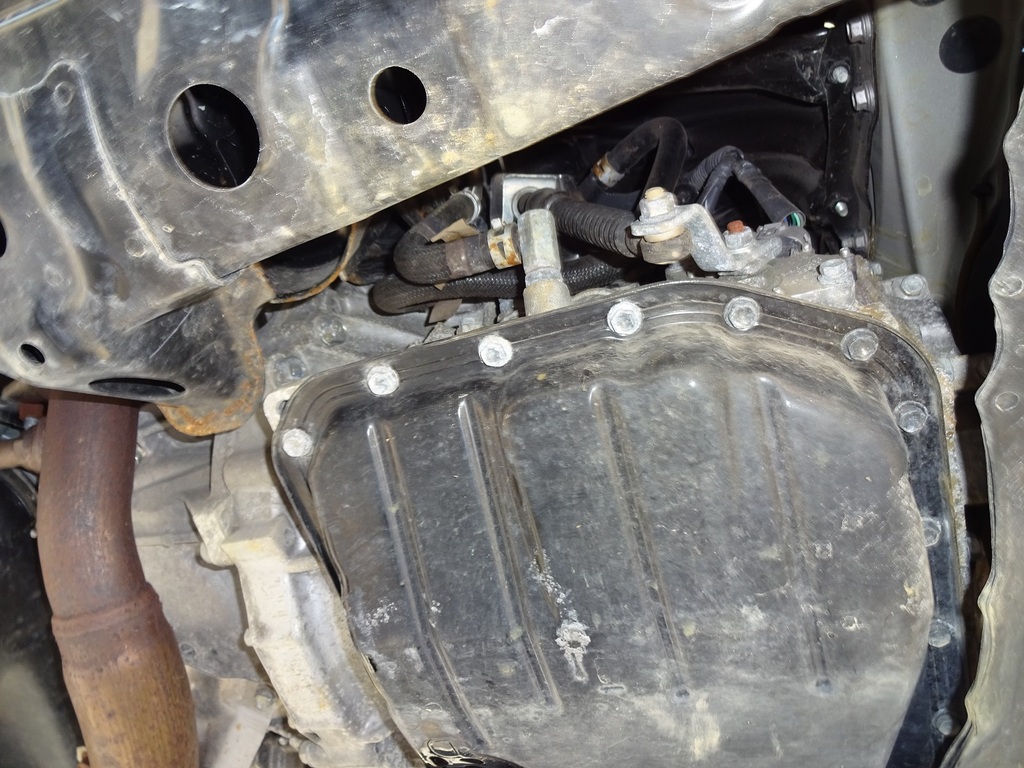 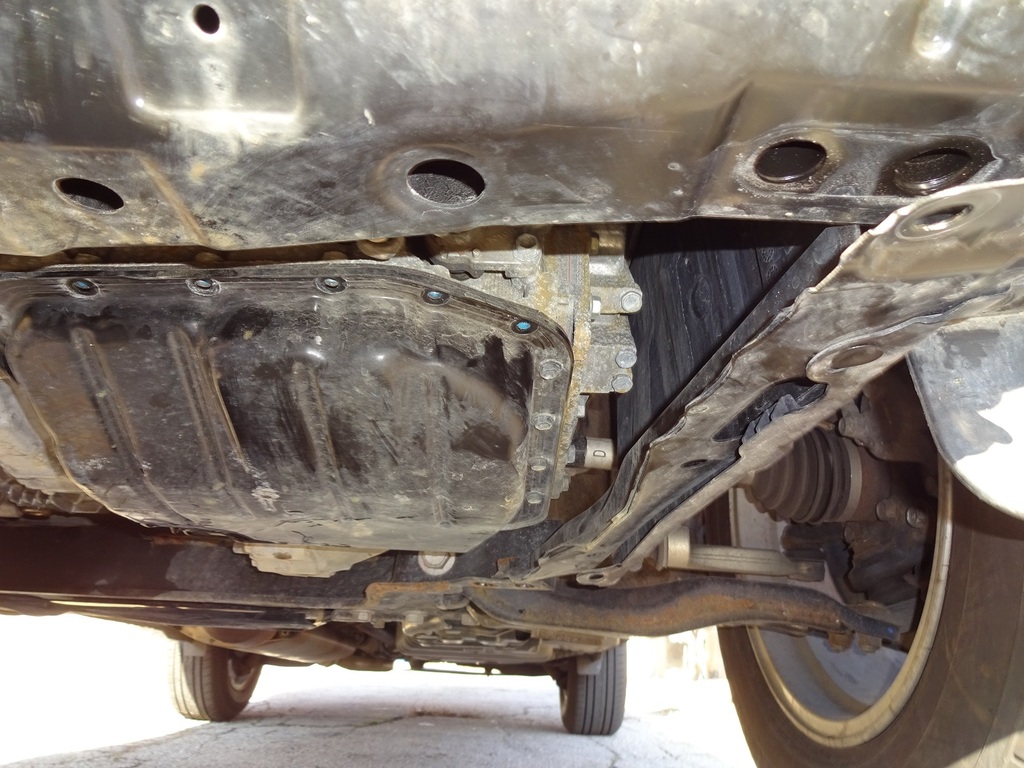 With the pan off, have a look inside and clean off the pan & the two magnets: 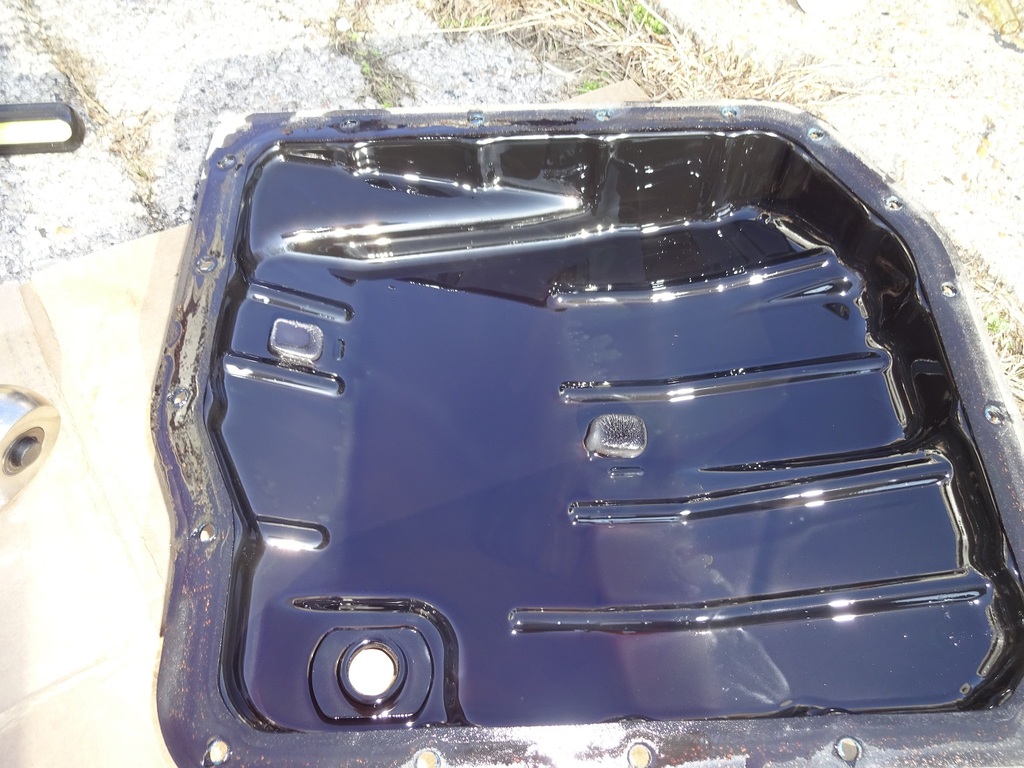 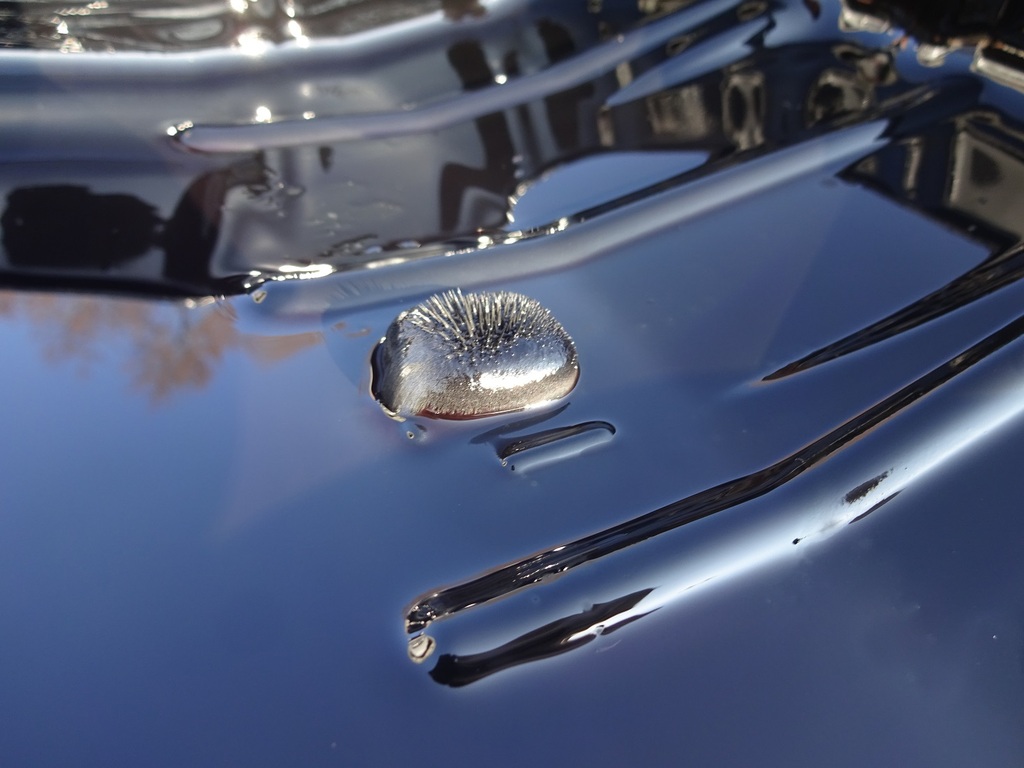 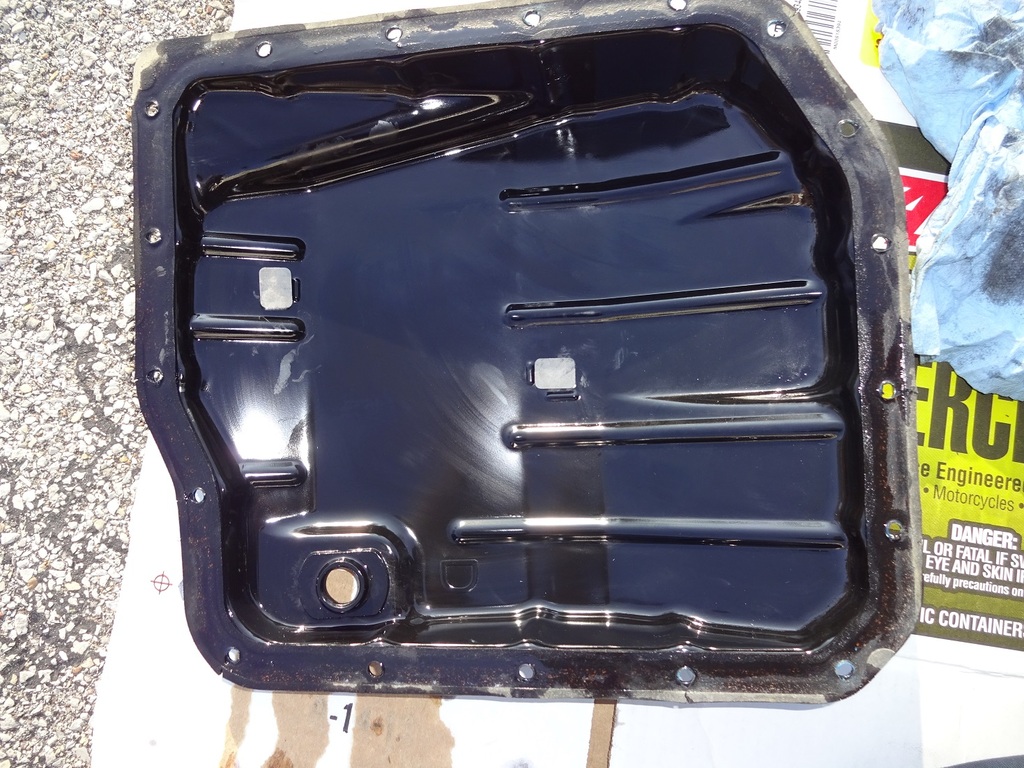 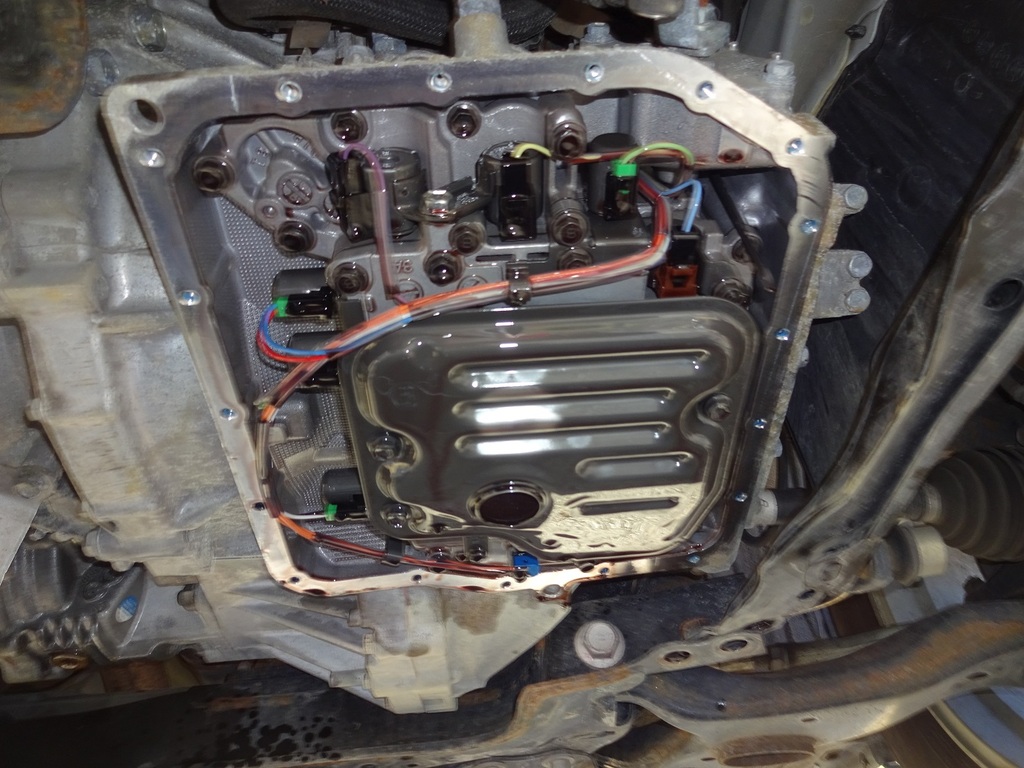 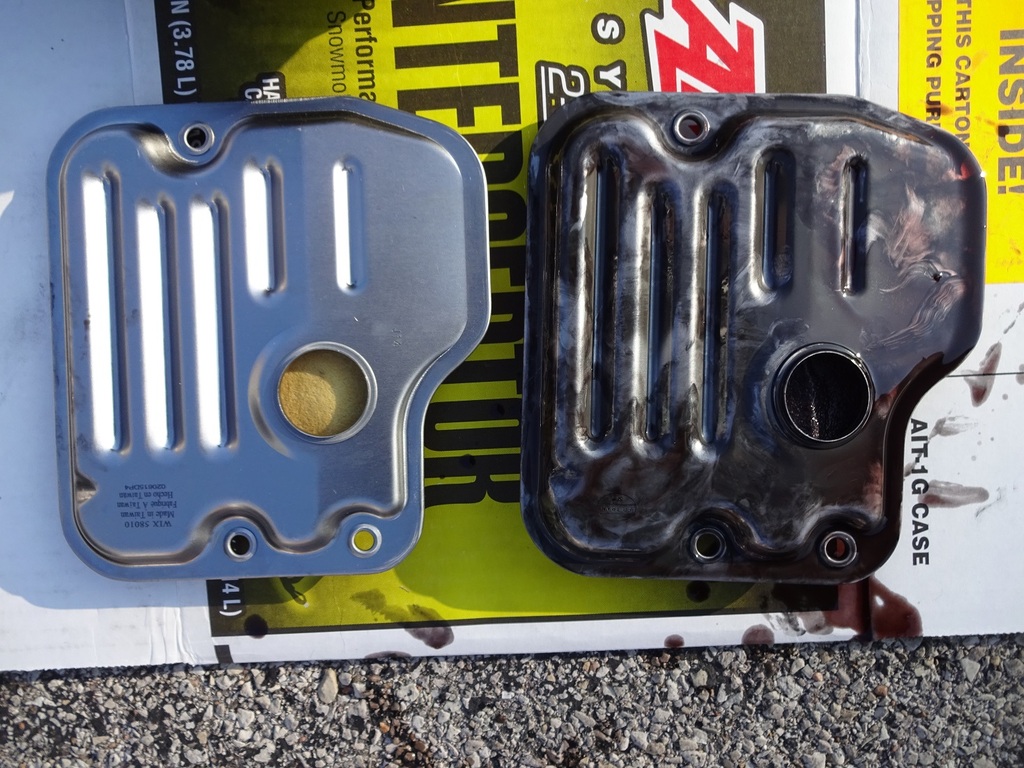 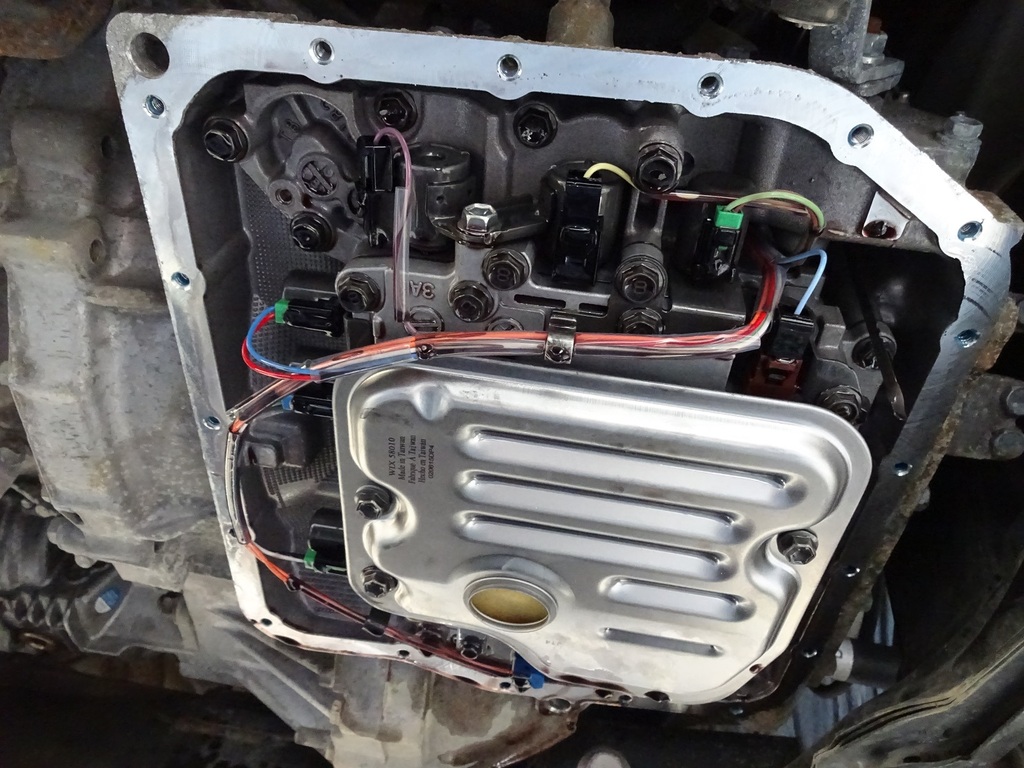 With that, I put the new gasket that came with the filter on the pan and tightened everything up. Personally, I didn’t use gasket sealant, but you may want to. I tightened everything to hand tight, save for the 17mm bolts for the subframe that I got much tighter than that. Worth noting: the drain pan bolts did have blue loctite on them, which I did not reapply. Refill 4-5 quarts of the fluid lost from this process.

So far, only a small portion of the ATF has been changed – the rest is still dirty fluid. In order to get the rest of it, locate the ATF return line, which is in front of the ATF drain pan. Disconnect the hose from the spigot, and insert a new hose (make sure it fits tightly, or ziptie it once inside the ATF hose): 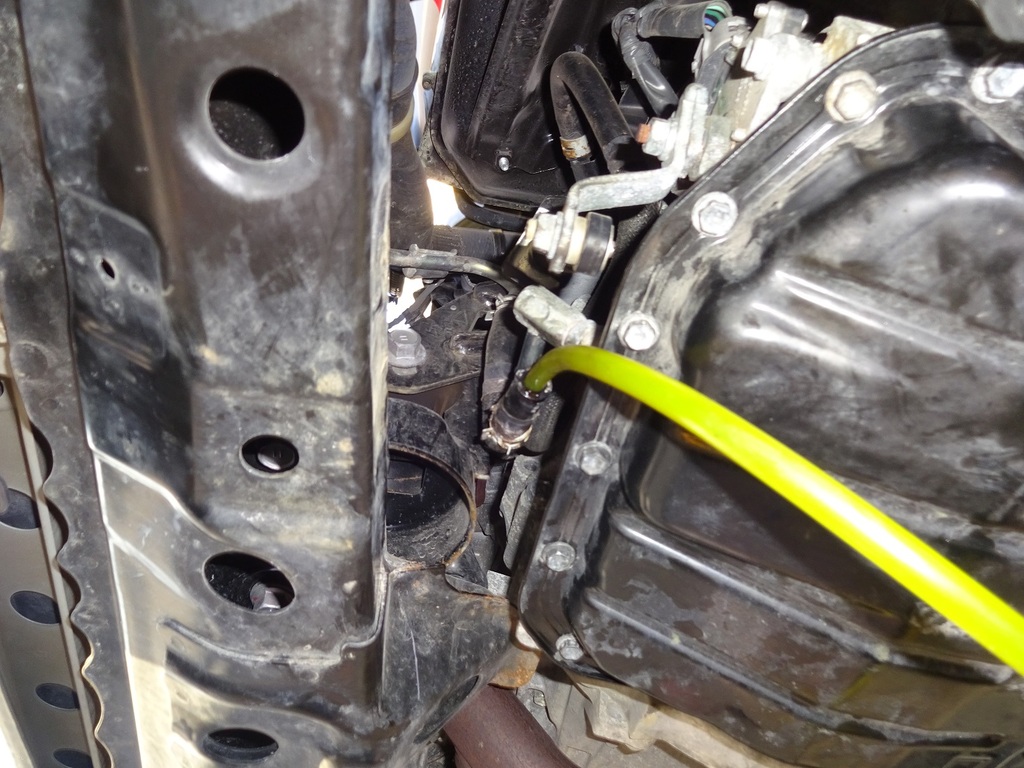 This is where the jug really comes in handy – snake the hose into the jug, and make sure it is secure there as well. Turn the car on, and the rest of the old ATF fluid will start pouring into the jug. I did 1 quart at a time – turn the car on, let a quart pass through, turn the car off, then refill as you go along via the long funnel & where the ATF dipstick is: 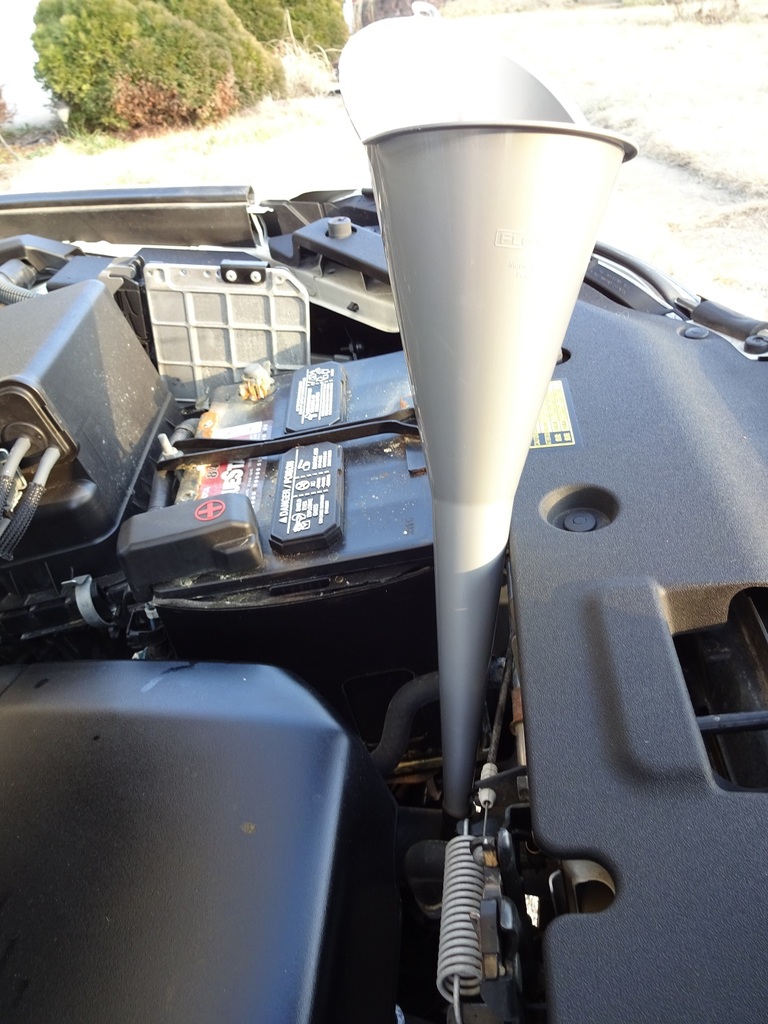 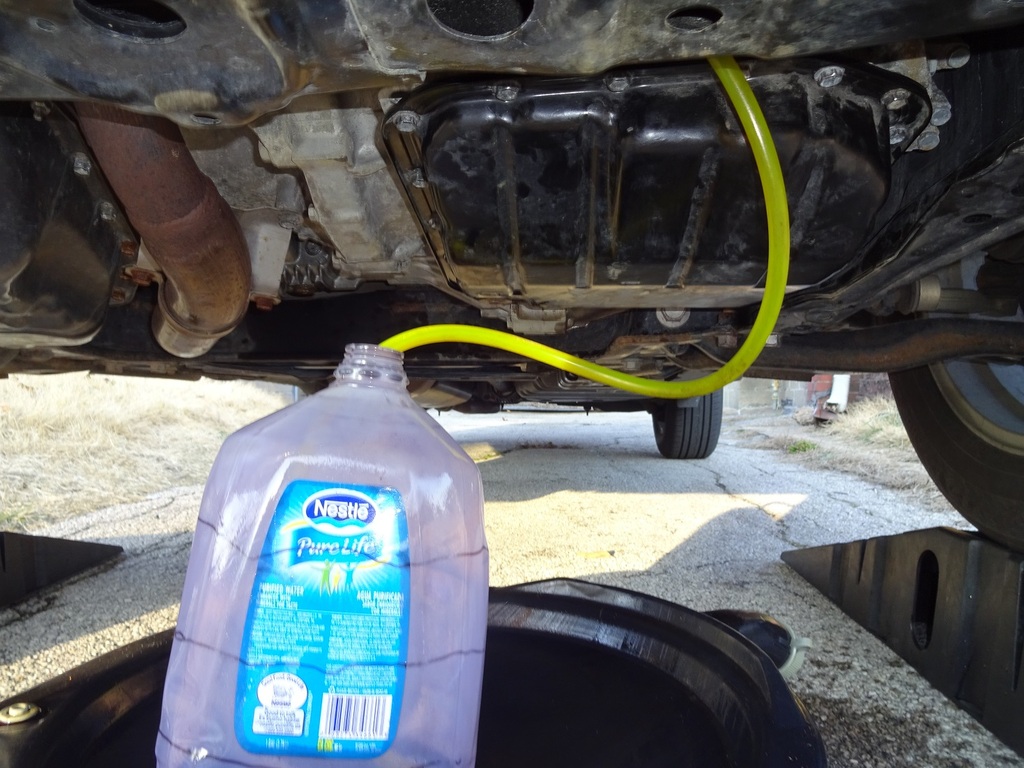 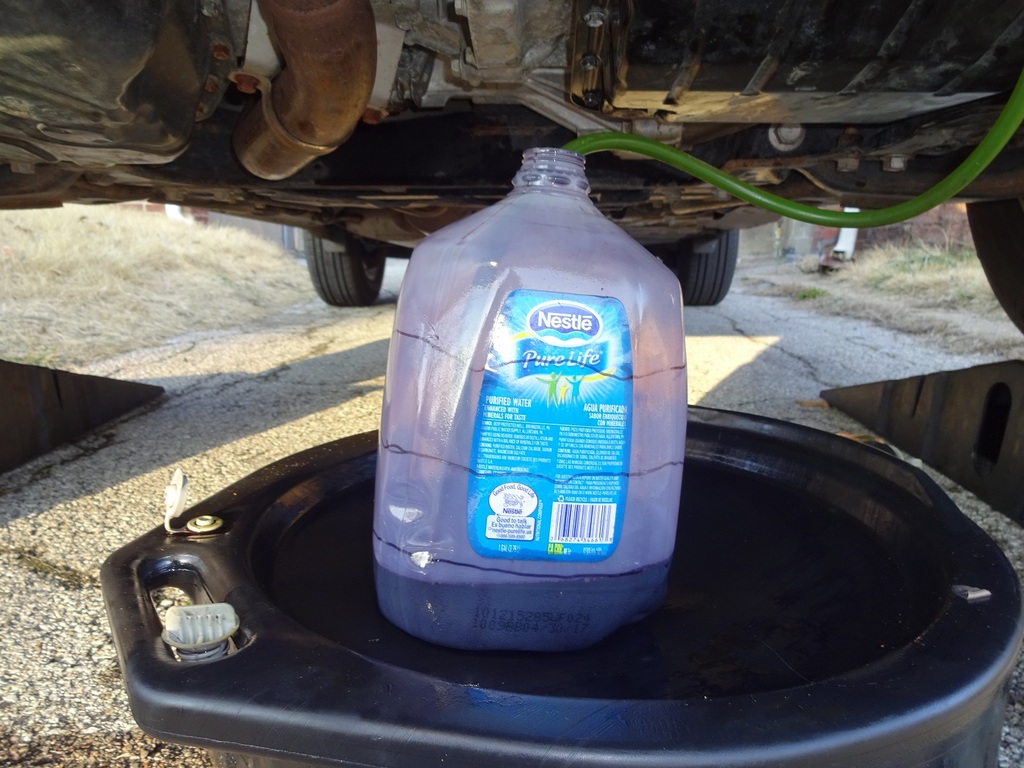 I did this roughly 8 times before wrapping up. Once that is done, reattach the AT line to the pan, and button up the rest of the car – you’re done – nearly! It does take a few drives to let the new fluid cycle through completely, and you’re usually short a couple of quarts once that is complete – make sure you have enough fluid leftover to fill it back up!