After an especially long winter due to Covid, we are BACK (ish)! More on that later.

The first event of the year was pushed back quite a bit, but even with the extra time we faced a time crunch to have the cars ready. The Evo is still sitting in the shop, so it was a good chance to take the Golf out to finally see what all my prep would amount to. The Golf technically isn’t 100% ready – I still need to install the harness and it has a valve cleaning due on Tuesday. It is a hectic time of year as well, between wrapping up my MBA, moving 2 or 3 times, getting a new place, and prepping the cars, but it was now or never to make sure I could scrub in the tires for both cars (Golf this week, Evo next week).

This was my first time ever driving the Golf R in anger – and wow. It stunk. The first run felt awful. The first thing I noticed was an overall lack of grip/delay in car behavior – I felt the car only actually turned a tenth after I turned the wheel. The next thing I noticed was the body roll – the car felt like a boat out there, with every lateral and longitudinal g shifting the car around from end to end. The brakes (Stoptech Sports) did not feel adept at stopping the car very well either. All of these things felt fine on the street, but for performance driving, I was very underwhelmed.

After the first run though, things started to pick up. I still maintain that the RS4s are not great tires, but after they scrubbed in they started to hold a little better. I started spraying after the first run just to maintain the temps, and I settled at pressures around 35-36psi. The brakes started to feel a bit better too – I never bedded the new pads and new rotors in, which probably explains the initial lack of brake force. They are still not fantastic, but should be okay for light work.

The AWD system also felt like a bit of a mystery to me as well. I could feel it doing things underneath me, but I did not get a good handle on what it was doing at certain times. This may just be a seat time thing to get used to on this car. It definitely applies torque to the rear wheels late, after being full throttle in the car. It does have the ability to go sideways, and I did get a good amount of yaw in one of the turns, which is a good sign. I would put it at about 1.5-2s off pace of the late M3, with its RE71Rs. 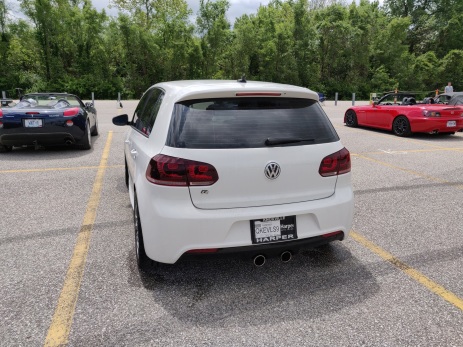 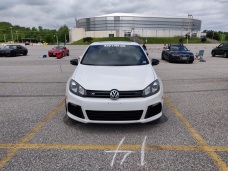 I did get one CEL after the 4th run – because of course VW. Turned out to be a P0140 O2 sensor code, which is odd. I assume it would have been something to do with me sitting on the rev limiter the whole run, as I tried not shifting into 3rd for that one. Cleared it, started shifting back into 3rd, and didn’t see it again after that.

I didn’t grab an exact time from the results, but I do know I picked up a cone on the slalom on my 6th and quickest run. Not really a big deal here as I’m just trying to shake down the car. I would have hated for all of this to have been during my first track day, it would have been really unnerving to discover some of its traits while on track. Part of me is really tempted to get a simple spring/strut or even just strut setup for the car, but it’s really not a rabbit hole I want to go down again. For now, I will leave the car alone.

So what is next? Well, there’s another BSCC event this upcoming weekend, which I will be taking the Evo for. I was just about all set to then hit the 6/7 track day for Autobahn with Northwoods Shelby – who basically guaranteed the event was going to happen. The event got canceled, so at the moment it is very uncertain which track days are and are not going to happen. When I’m done with school and all the moving, I will take some time to figure if the schedule needs to be reworked or not.