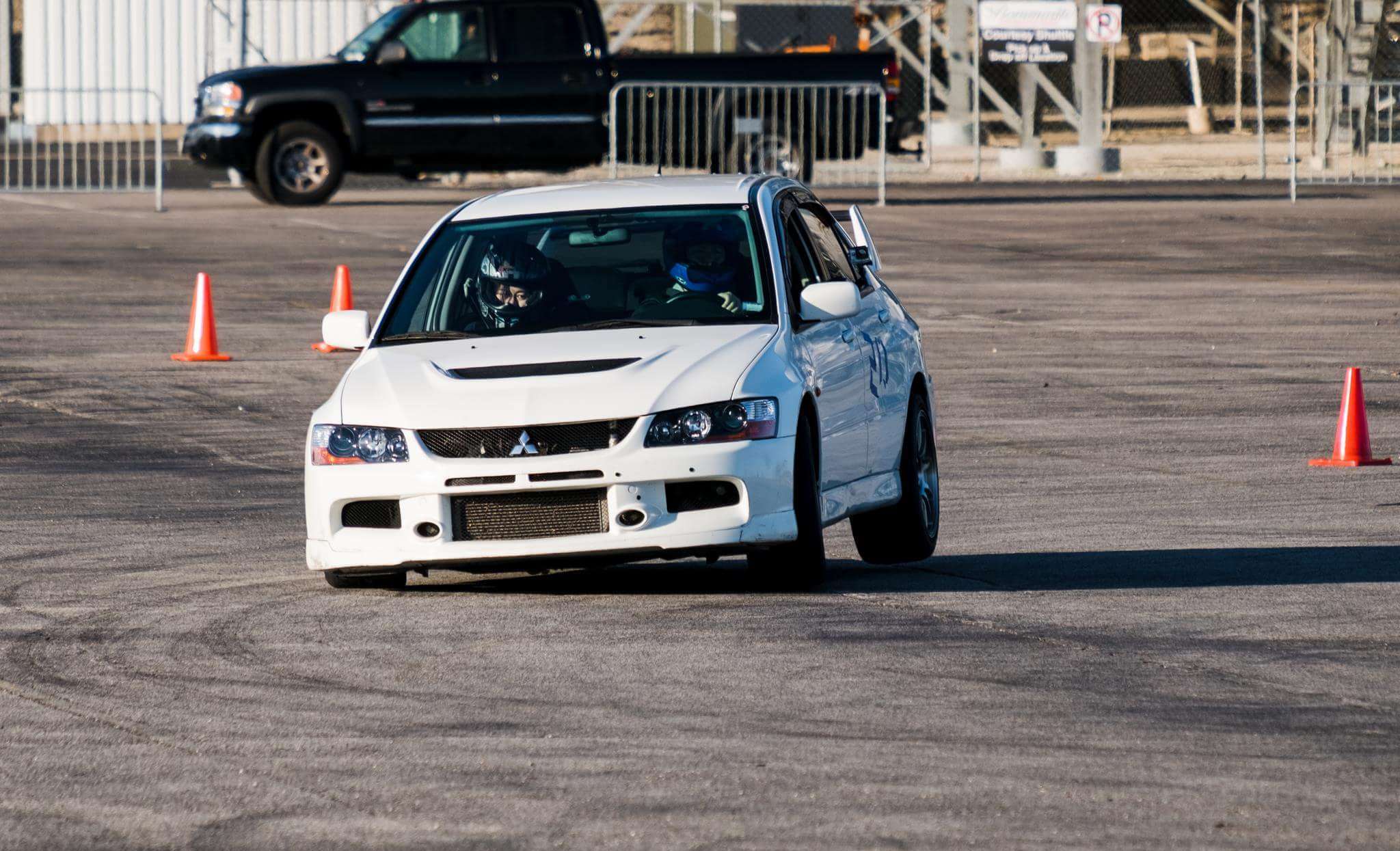 What started out as a blog strictly for my Mini has become more of a blog about all my current projects and motorsports activities.

I discovered motorsports by accident. A local car club’s business card was stuck to my windshield after eating at a restaurant one day, and upon visiting their website, found out that they held small, fast, and safe motorsport events called “autocross” every month near my university. I started autoxing very casually (2-4 events/yr) between about 2007-2012. I started in a Tarmac Black 2006 Evo IX GSR in SM, which was always on street tires & not competitively modified – probably one of the reasons I autoxed so infrequently. In January of 2013, I purchased a near-stock Wicked White Evo IX MR with about 22,000 miles to replace my GSR. When I swapped over the rear differential, the shop that did it had actually stripped the fill bolt, leaving the car more or less undriveable until I repaired the differential. This turned out to be something of a blessing in disguise.

Given all the downtime the Evo saw, I finally decided that it was time to get a daily driver. During March of 2013, I purchased a base 2008 Mini Cooper. It was Lightning Blue, with a 6 speed manual. With the Evo down, I decided to take the Mini for a spin at one of the local autox events – and fell in love with competition of autocross. For the first time, I was driving a relatively competitive car – though not fully prepped, the Mini handled well and was easy to drive, and I landed 38th in index overall that year.

By the end of 2013, I knew what I wanted to do. I decided to start from scratch: order a brand new MINI, spec’ed exactly the way I wanted, to be competitive in HS, and fully prepped the car by SCCA’s then-new street class rules. I probably autoxed more in 2014 than all my past years combined. I focused on improving as a driver, locking down sponsors, and trying to develop a system/methodology that would make me nationally competitive. I improved greatly in 2014, getting 17th overall in index.

2015 was a blur, getting about as many runs as I did in 2014 on less events – much to do with autocrossing two cars at multiple events. I had finally started to dial in the Evo, and had a good amount of progress in both cars – especially the Mini by the end. While I finished 18th, I had made a lot of improvements in driving overall.

2016 and 2017 passed with a number of failures and successes. The Mini saw very little change year over year, and I began re-focusing my attention on the Evo. The Mini gradually saw less and less use, especially with the various daily driver additions I saw during this time. In 2018, I sold the Mini in search of a balanced RWD – but which?

I floated the possibility of a number of cars during this time. The Subaru/Toyota twins, S2000s, 370z’s, etc. The Subaru BRZ was the top running car for a while, but given the experience with the Mini, I decided no more temporary cars. Every car I bought moving forward would be a “keeper” – something I intended to keep forever. With that in mind, there was only one car that fit the bill – a car I wanted since it’s debut in 2007/2008 for its driving dynamics, poise, looks, and overall performance: the E92 M3.

The M3 is currently prepped for FS in SCCA Solo, and I have plans to do track days in the car as well. The Evo has continued to see most of the attention, as I tweak the car year over year to improve the handling and performance, trying to get it to mirror the best parts of all the cars I have owned thus far. I make changes to the Evo, test out at autox, and run on track days. The M3 has admittedly seen little use, but I hope for that to change as the Evo’s build settles down.

Most of the focus of this blog is on my motorsport activity in general, but I track all the cars I own for various modifications & maintenance posts, in large part to keep track of everything I’m doing with all my cars. Although this is more intended to be a fairly private journal of my activity, I hope that it can prove useful to anyone looking to do similar with their builds.

2020 – Much of 2020 ended up shifting around due to Covid-19. We are introducing a new driver to the team, Y. Kim. I sold the M3, which all but sealed my effort at being “serious” at autox, ending an admittedly lackluster career – I will continue autocross in order to test n tune cars, and I still believe it is the best way of getting used to the feeling of a car at the limit. Otherwise, for the first time in 2020, I plan to begin competing in various time attack series with my Evo.

One thought on “About”